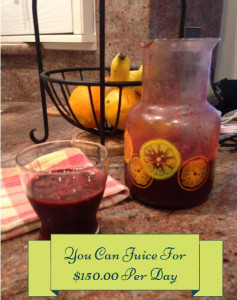 I am no stranger to deprivation. Committing to a full-time writer’s life involves a lot of sacrifice. I don’t go on vacations unless they are free or a 2-fer; I cut and color my own hair, and I always go for the, “buy 6 and get the 7th pair free” packaged underwear. I’ve learned many a trade including: replacing garbage disposals and toilets, installing drywall, laying wood flooring and ceilings, soldering circuit boards and the hard to believe, underwater tile grouting to fix a leak in my swimming pool, aka “The Money Pit.”

My attempts to save money are always aimed at a consistent and ongoing goal. They allow me to spend money on writing related expenses. There have been a few backfires heard around my home. Nothing to be proud of, and all of them the source for an overwhelming need to dry heave.

Today, I share one such experience that started out with the most healthy, positively focused intent. After watching the documentary, Fat, Sick & Nearly Dead, which documents two guy’s journey back to health by way of a juicer. It mentioned that one could juice on approximately $14.00 per day, or more if you wanted to go organic.

My first mistake yesterday was heading off to the grocery store to get my veggies and fruits to be juiced before finding the juicer. Recent purging of the contents of closets and storage areas at my house meant some of those items that don’t get to see the light of day as often as some may have found new hiding places.

After a couple of multi-tasking hours of half-ass searching I finally found my Jack LaLanne juicer in a bag in the back of a storage closet in my garage. Not exactly easy access for my impromptu health reboots that come along every now and then. It was definitely the first such reboot to follow the watching of a documentary. Usually, one needs a cocktail or a call to the therapist.

My juicer had seen a few good juicings after a 08’ throat surgery and a couple of years ago after cancer surgery. Yes, it was a post-surgery, drug-induced infomercial buy, of which I take full financial responsibility. They tell me convalescing post-surgery women are considered a marketing niche. The same purchase was made by my friend, Julie after she had a surgery, but she got the Vita-Mix. I am so jealous.

Don’t be fooled, juicing is a laborious event. There’s the buying, the cutting of the fruits and veggies, the storing, and the clean-up. The pulp from the juiced fruits and veggies gathers in a catch basin and looks like technicolor saw dust. I’ve baked it into breads and this time I threw it into the crockpot to make a vegetable broth. I had great stuff in there: kale, beets, spinach, carrots, and apples. The juice that was produced tasted great and the vibrant color from the beets dominated this healthy brew.

I knew it was a pain to wash the juicer so I decided to juice all the items that I had just purchased. To get the juicer out each time I wanted some juice seemed inefficient and would probably upend my attempts to be healthier.

I hunkered down and cut and juiced and filled my carafe. The amount of technicolor saw dust I produced was incredible. In the spirit of recycling it made its way into the crock pot. All I had to do was rinse off the remaining saw dust and turn on the garbage disposal to clean up.

Not realizing the power that wads of little fibrous peels could have, I didn’t immediately turn on the garbage disposal. Mistake! When I did I noticed the dishes in the sink on the right were floating in disgusting backwash from the pipes below.

The next two hours were spent using all my trade skills to get the clog washed away. I put my plumber’s hat on and proceeded to snake one of the clear-out traps, I plunged, cleared out the P-trap under the sink and finally had to give up. Those of you who are impressed with my handy-girl vocabulary are welcome to watch the same DIY YouTube videos that I did to complete your honorary vocational school degree. The clog was not in the pipes closest to the kitchen sink. It was somewhere beyond my reach, my expertise and my budget.

The plumber couldn’t make it until this morning. Thank God writers can’t afford to have dinner parties of twelve because I would have had to send everyone home last night. Wow, I dodged a bullet. Those of you who know me are actually laughing out loud after that remark.

When Steve, my plumber arrived I stepped right into my waste disposal confessional. I told him that we compost at our house and rarely if ever put any coffee grounds, pasta or other clog-happy material down the sink. I took responsibility for it, but told him I was a bit perplexed at what had happened.

Adding to my perplexitude (not a word but it works), was finding out that the, “We’ll Rat Proof Your House” guys that came a few years ago had cemented the clear-out trap that leads from the kitchen sink to the outside of the house. Yes, we had to be rat-proofed. Don’t judge – we live by a trail with lots of vermin, happy well-fed vermin.

RULE NUMBER ONE: do not cement in your sewer traps no matter how big your rats are. You will pay much more for plumbing fixes than sending an entire rat family, including kids and grandparents, to Disneyland.

As I sipped my really expensive juice while watching my plumber fill out his higher than normal invoice I was reminded of many things, most involved profanity. Some writers may lead a deprived life, but hearing the flow of water successfully finding its way out of your kitchen sink is one of life’s little joys meant to be celebrated. That, and life’s little backfires will continue to provide an unending supply of writing material whether I need it or not.