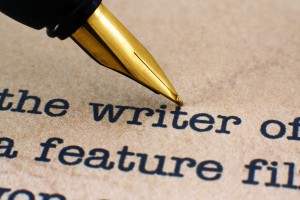 Flexibility is what makes writers marketable. When I set out to make a writing career for myself I decided to write whatever I could to demonstrate my versatility. As a result I’ve compiled quite a list of items including television and feature film scripts (Comedy, Horror, Rom Com); book-to-script adaptations; short subject films; newspaper articles, website copy, blogs, and social media content; business bios; non-fiction ghost writing; children’s books; and even eulogies and medical reports – usually the medical report comes before the eulogy.

This cache of projects was accumulated over nearly a decade. So, you can imagine my surprise and wonder when four of my projects got attention from interested parties all within the same week.

A rewrite and submission request for an award winning short film script that I wrote back in 2005 came in because a woman director is looking for a project to produce. I was able to land a meeting with a well-connected actress/producer for a sitcom pilot project. A rewrite for a group pet project for which I wrote a 1-hour TV pilot and a feature film has been optioned again and production looks very promising for the feature film script. And finally, a call for children’s books to be used as a writing sample for a potential writer’s job came to me so I submitted my book, Takota’s Dream for consideration.

If you ask any writer, there are days, months, years that go by between your projects getting any attention. My projects live in a near constant state of, “all dressed up with nowhere to go.” The fact that in the span of one week four of my projects got to come out to play is astonishing.

Perhaps there’s a bit of magic or astrological mojo in the air that’s guiding this career of mine. I’ll take any and all of it. To be prepared for weeks like this by having the completed projects ready to deliver gives me a feeling of satisfaction that is hard to match. I am reaping the rewards of my plan to produce a diverse collection of projects, and all I can be is extremely grateful. And look, it even gave me something to write about.