While attending a documentary filmmaking workshop this week with award-winning documentary film maker, Kevin Knoblock I was reminded of how rewarding filmmaking can be. It’s what I love to do above all other things. I know this because it is the one thing I can work on for hours and hours, days and months and years with sustained commitment. Plus, my mind never stops conjuring up ideas for small, medium and large film projects. Really – never. Can’t shut it off.

Over 30 years ago I wrote, directed, produced and edited my first documentary. It was a 55 minute movie shot on Super 8mm film documenting my last year playing basketball in college titled, Hornet Basketball 1982. I knew back then, long before the world became abundant with “filmmakers” with smartphones in hand, that this was a story I needed to capture for myself. 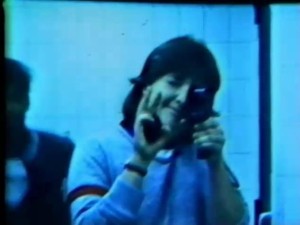 It was a labor of love and I enjoyed every minute of it. I was working as a Shootin’ Gallery attendant at Knott’s Berry Farm making minimum wage, but found a way to save my money to purchase a camera, editing equipment and a film projector. Each paycheck I would head down to Kmart and buy a cartridge or two of film to make sure I had enough on hand. These cartridges were about $2.00 each and provided three minutes of shooting time.

Once I shot the footage I would take it back to the photo department at Kmart and send it off in an envelope for developing. Waiting those 5-7 business days was excruciating. It definitely helped me develop the ability to delay gratification, something a writer must be really, really good at if she is to survive the writer’s life.

As events and road trips and tournaments approached I solicited the help of my friend, and sometimes reluctant camera operator, Nancy to get the coverage I needed for my movie. I was shooting on a shoe string budget so the luxury of getting footage on a second camera wasn’t even considered. Honestly, I didn’t even know people did that.

I had an idea for a really cool sequence in the film and I needed to get it right the first time. There were no repeat performances on this stuff. The first part of our season involved a lot of conditioning on the court and off. One of the rigors our coach put us through was high-stepping and hopping through the football rope apparatus that sat out in the football stadium. Most of us had never even seen these things before let alone speed through them trying to avoid getting a flat tire from a teammate on your heels.

Twelve tall and lanky woman basketball players worked in concert together and it was something truly beautiful to see. I knew from the previous year’s conditioning season that we would be doing it again and this was my chance to get it on film. I had a song picked out: Elton John’s little known, “A theme from a non-existent Television show,” which would sync perfectly with the feel and tempo of the footage.

I knew if I didn’t get it on film the opportunity would be lost. This was the last year I would be playing organized basketball, which I have played since the 3rd grade. So we shot the footage and I was so happy that it went off without a hitch. Waiting those 5-7 days for developing was difficult but I was feeling pretty positive about the coverage.

I remember walking into the Kmart to pick up the film thinking how cool I was and how I would impress my friends with my Hollywood-esque abilities. I paid the two dollars and forty-eight cents in cash and picked up my envelope. I sat in my car and opened it up because I couldn’t wait any longer. I pulled a few inches of film from the reel and held it up to the light above my rearview mirror. I could see each frame and it was filled with wonderful color. There was always the chance the film would have gotten exposed and I would end up with a blank reel. Crisis diverted. I quickly stashed it back into the envelope and drove home.

Once I got home I went to my room and set up my projector, aimed it at my closet doors and had myself a little screening session. I watched the first minute’s which were filled with usable content. The anticipation of seeing the football rope sequence had me on the edge of my bed. I watched in horror as this beautiful piece of footage, with lens flare and all, was ruined by a huge black piece of hairy looking lint that must have been inside the camera.

I was pissed off and devastated. Did I use the damn footage anyway? You’re damn right I did. My dream for this shot was not going to die. When my viewing public saw it I would say, “Please excuse the black fuzzy hair on the screen in the football rope scene. This sequence was too good to throw away and I wanted it in the movie.” Since they really didn’t understand why I was making the movie in the first place they really didn’t mind. This was the 80’s and no one, I mean no one, kept a movie camera with them at all times to catch footage. Every time I saw that fuzz on the screen I cringed until it was off.

Now, it reminds me that in filmmaking, which for me involves writing, producing, editing, and distributing, you have to use what you’ve got to make your dreams come true.

I haven’t taken very many film classes since graduating from UCLA’s program in 2003. So, for some reason I was a little apprehensive on my way to the film workshop this week. Was it my age? I’m not usually bugged too much about my age. To me it’s a wonderful resource. I’ve got such a resume of real life experiences that could furnish enough material to fill a cache of shorts, mini-series, movies of the week, documentaries and feature films.

For some reason I thought the only thing I was going to have in common with the always young-male-heavy attendees was our shared propensity toward sparse chin whiskers. Once I got there and met everyone I knew I didn’t have anything to worry about. It seems like once the guys realize I’m not their mother and definitely not their lover we can get down to business and talk filmmaking. It was nice seeing two other women attending the workshop. They were pretty quiet throughout but they were there representing the sisterhood – Woop Woop!

I learned a lot about documentary filmmaking this week and a bit about myself. I wish I would have made a second documentary after Hornet Basketball 1982. Perhaps one that followed me through the years of working jobs I hated because I was too afraid to do what I really wanted to do until my 40’s hit and I took the biggest risk of my life. Documentaries may not be governed by the required and confining thumb cuffs of a happy ending; but any story must have a satisfying end. I’m using everything I’ve got to make mine happen, black pieces of hairy looking lint and all.